The Spirit Mountain Community Fund is governed by an eight member board of trustees. 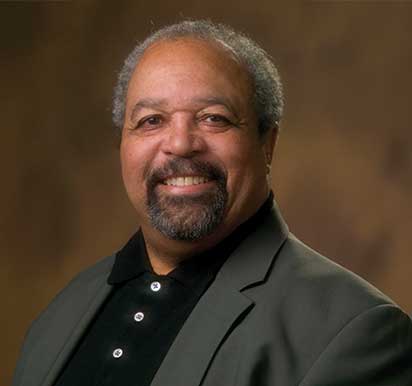 Chip Lazenby is presently owner of Lazenby & Associates a strategic and legal consulting firm based in Portland. He has previously served as general counsel for Portland State University, general counsel for Governor John Kitzhaber, MD and for the Portland Development Commission. In addition to being an attorney, he holds an MBA from the University of Oregon. Besides serving on the Community Fund Board, Chip is on the Oregon Public Defense Services Commission providing oversight of public defender contracts for the state of Oregon. He lives with his wife Lynette and son Michael in Portland. They love the outdoors and travel. Chip is a baseball fan. 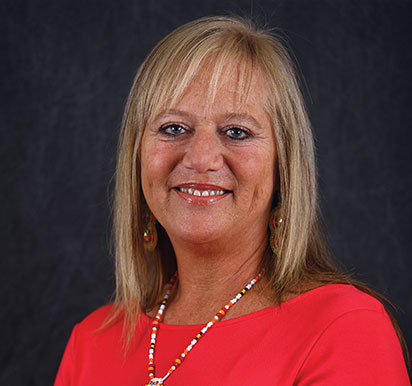 Denise Elvira Harvey was born in Castro Valley, California. She lived in the San Francisco Bay area from 1962 to 1976. In 1976, her mother decided to return to Oregon and she attended high school in Salem. Soon after graduation, she moved to Southern California, where she lived and raised four sons – Benjamin, Ryan, Sean and Jared. She also raised two stepchildren, Blair and Alex, with her husband, John Harvey. She worked in the Los Angeles County Emergency Department for 16 years as a health coordinator and attended Mount San Antonio College from 1999 to 2002. Her husband retired from the Los Angeles County Sheriff’s Department in 2001 and the family decided to relocate to Oregon. Harvey started working for the Tribe in 2002 in the Human Resources Department as the Mentorship and Workforce Development coordinator, a position she held until 2010. In 2004, she was appointed to the Grand Ronde Gaming Commission and, in 2005, was appointed as chair of the commission. She was elected to Tribal Council in 2013. “In my 11 years working for the Tribe, I have continually worked with Tribal members and their families. I look forward to the future and I am honored to be elected to Tribal Council.” 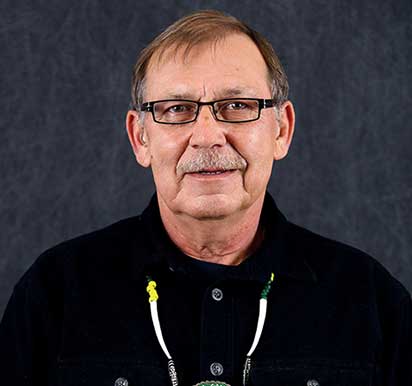 Tribal Elder Jack Giffen Jr. is serving his third three-year term on Tribal Council, having been elected in 2003, 2006 and 2010. He has served as Tribal Council secretary and on the council’s Legal Committee. In 2012, he was elected Tribal Council vice chair by his fellow Tribal Council members. His other services to the Tribe include being a Tribal Council delegate to the National Indian Gaming Association, Affiliated Tribes of Northwest Indians, National Congress of American Indians, and Oregon Sports Authority. He has also served on the Spirit Mountain Gaming Inc. Board of Directors, and was previously on the Spirit Mountain Community Fund Board of Trustees. He was born in McMinnville, Ore., in 1951 and he and his wife Julie reside in Willamina. They have three sons and six grandchildren. His hobbies include elk hunting, cooking, and riding his Harley-Davidson motorcycle. He is a passionate University of Oregon Ducks football fan. 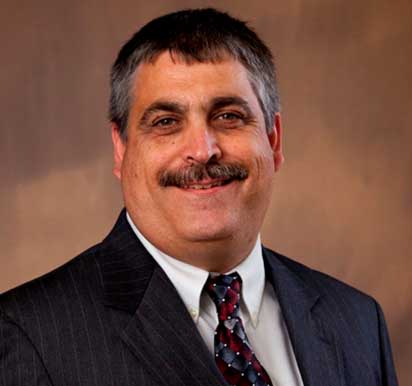 Ron has been with Spirit Mountain Casino since it opened in 1995. Prior to going to work for the Tribe Ron worked as a construction electrical superintendent on jobs all over the country. His last official construction job was the building of the original Casino. Ron was born in McMinnville and raised in the Sheridan/Willamina areas, as well as in Tillamook. He married his best friend, Anne, and they are the proud parents of three children. They recently welcomed a beautiful granddaughter to the family. Ron is honored to serve the residents of Oregon as a trustee for the Spirit Mountain Community Fund. 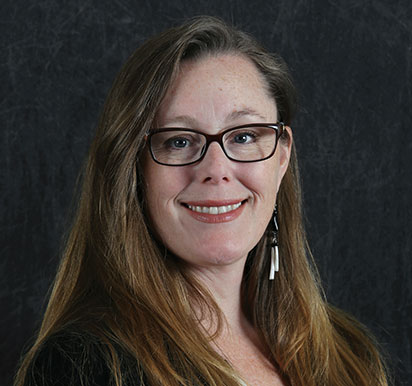 Kathleen George has spent her career helping tribal governments accomplish their goals and build their future. This work is the foundation to her deep commitment to ensuring that Tribes have a seat at the table when decisions are being made that affect Tribal people and resources. Prior to being elected to Tribal Council Kathleen was the Director of Spirit Mountain Community Fund, the philanthropic arm of the Tribe. This position also provided opportunities to educate the world of philanthropy about the significant needs and tremendous opportunities in Indian Country today. Before working in philanthropy she partnered with tribal communities throughout Oregon and Washington on efforts to restore healthy environments to protect tribal people and their resources. Kathleen’s consulting firm, Cedar Consulting, worked in natural resources policy and strategic planning. Kathleen currently serves on the Spirit Mountain Gaming Incorporated Board of Directors and has served on a number of boards and committees including •Oregon Environmental Quality Commission •Hatfield School of Government Center for Women’s Leadership •CTGR Domestic and Sexual Violence Prevention Program Advisory Board •Board of Grantmakers of Oregon and Southwest Washington •Women’s Foundation of Oregon Listen to Her Advisory Committee •Confederated Tribes of the Umatilla Indian Reservation Cultural Coalition She was awarded the Columbia River Hero Award by the Columbia River Toxics Reduction Working Group for her work to protect the health of tribal people who eat fish from Oregon rivers. She is also a graduate of Dominican University where she majored in Environmental Biology and studied public administration in Graduate School. Kathleen and her husband Rick live with their sons and Kathleen’s Mom in the country outside of Sheridan. 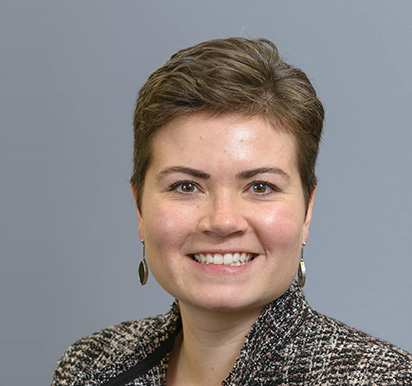 Representative Karin Power grew up in a small town in New Jersey and went to Mount Holyoke College in western Massachusetts before moving to the west coast. She's spent time in Geneva, Washington, D.C., Boston, Seattle, and Portland before making her home in Milwaukie. Rep. Power and her wife live in Milwaukie with their baby, and two rescue dogs. In her other job, Rep. Power is Associate General Counsel for The Freshwater Trust. She is a graduate of Lewis & Clark Law School. Rep. Power is committed to progress for our environment, for stronger communities and better schools, and for equity and equality. She puts her years of environmental law experience to work by advocating for cleaner water and air in our communities, and protecting Oregon's strong environmental heritage. As a new mother and first time homeowner, Rep. Power knows how crucial stable housing and public education are to building successful families and communities. Rep. Power is also the first LGBT woman elected to serve House District 41. She understands how important it is to make our government more accessible, and champions equitable policies both for the Oregon we are today and for the generations yet to come. In addition to her work in the Oregon Legislature and at The Freshwater Trust, Rep. Power is a board member of the Oregon Food Bank. In her spare time, she's working on fixer-upper projects for her new (old) 1920s house, and finding out which funny faces make her baby son laugh the hardest. Representative Power was elected to office in November 2016. Prior to her election, she served as a Milwaukie City Councilor, Chair of the Regional Wastewater Treatment Capacity Advisory Committee, and as Chair of the Island Station Neighborhood District Association. 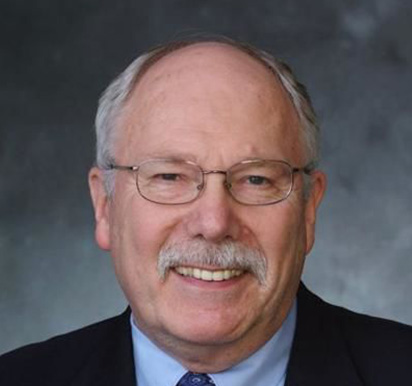 OR Senator for District 5

Senator Arnie Roblan represents the scenic and rugged central Oregon coast comprising the 5th Senate District. Previously Senator Roblan served 4 terms as Representative for House District 9, two terms as Co-Speaker. Senator Roblan's commitment to his community long precedes his election to public office. He is a founding boardmember of Friends of New and Sustainable Industry (FONSI) and has served on the boards of several local organizations, including the Coos Bay/ North Bend Water Board, the Coos Educators Federal Credit Union, Belloni Ranch, YMCA Youth in Government and the Oregon Coastal Environments Network (OCEAN). Senator Arnie Roblan also served on the boards of numerous organizations, including the Southwestern Oregon Transportation and Economic Development Workgroup, the Oregon Education Accountability Roundtable, the Governance Group of the Capitol Restoration Project, the Coastal Caucus and the Chalkboard Project. A former math teacher and principal of Marshfield High School in Coos Bay, Oregon, Senator Roblan earned his B.A. degree from the University of Washington in 1971 and his M.A. degree from the University of Oregon in 1983. He began his lengthy career teaching mathematics at Marshfield High School. He was soon promoted to Dean of Students, later to Assistant Principal and finally, in 1989, to Principal. Senator Roblan's received the Milken Education Award in 1997 and, in 2002, was recognized by his alma mater as a University of Oregon Distinguished Alumnus. In 2011, the Oregon Business Association named him Statesman of the Year Award in recognition of his extraordinary achievements for public service, consensus building, and forging collaborative solutions to critical issues facing Oregon. In 2012, he was honored with the “Public Officials of the Year” awards from Governing Magazine. Senator Arnie Roblan and his wife Arlene, who have lived in Coos Bay for the past 35 years, raised three wonderful children of whom he is very proud. 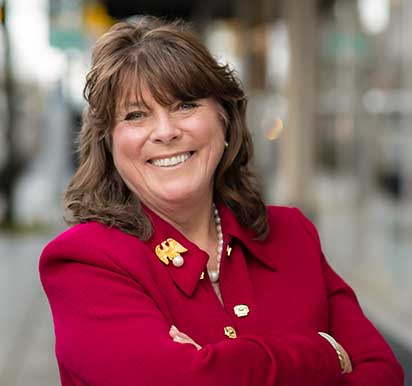 Martha Schrader has served continuously as a Clackamas County Commissioner since January 2013. She previously served as a commissioner from 2003 to 2009 (and as Chair from 2005 to 2007). Martha represented Oregon’s 20th District as state senator from 2009 to 2011. Before entering office, Martha was an entomologist, a schoolteacher and a librarian. From 1982 until 2012, she owned and operated Three Rivers Farm in Canby, growing and selling local organic produce. She is the proud mother of five children and three grandchildren. In her free time, Martha enjoys kayaking on the Clackamas River and around Willamette Falls. Martha holds a bachelor’s degree from the College of Agriculture and Life Sciences at Cornell University, a master's degree in entomology from the University of Illinois, and a master’s degree in education from Portland State University. She is also a fellow with the American Leadership Forum. Bringing together her love of fresh food, farms and home cooking, Martha has a cooking show on the Clackamas County Government Channel called Cooking with the Commissioner.

We are available to answer questions and address concerns throughout the process.